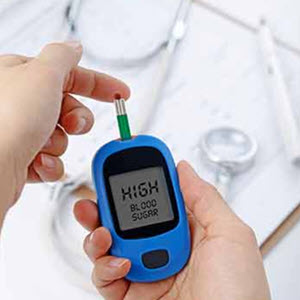 Beau's lines are transverse grooves or depressions parallel to the lunula. They are often associated with infections (typhus, acute rheumatic fever, malaria, acquired immunodeficiency syndrome [AIDS]);nutritional disorders (protein deficiency, pellagra);circulatory problems (myocardial infarction, Raynaud's disease);dysmetabolic states (diabetes, hypothyroidism, hypocalcemia); digestive diseases (diarrhea, enterocolitis, chronic pancreatitis, sprue); drugs (chemotherapy agents);operations;and alcoholism. Beau's lines are caused by conditions that cause the nail to grow slowly or even cease to grow for short intervals. The point of arrested growth is seen as a transverse groove in the nail. These lines are most commonly seen in the thumbnails and toenails. Figure 8-6A shows a patient's fingers with Beau's lines on the nails. Figure 8-6B shows Beau's lines in the toenails of a patient who had undergone major surgery 5 months earlier.

On occasion, a white transverse line or band results from poisoning or an acute systemic illness. These lines, called Mees' bands, are historically associated with chronic arsenic poisoning. These lines or bands are also parallel to the lunula. By measuring the width of the line and approximating nail growth at 1 mm per week, the examiner may be able to determine the duration of the antecedent acute illness. Figure 8-7 shows the fingernails of a patient who had received chemotherapy several weeks earlier.

Lindsay's nails are also called ''half-and-half nails.'' The proximal portion of the nail bed is whitish, whereas the distal part is red or pink. Chronic renal disease and azotemia are commonly associated with this type of nail abnormality. Figure 8-8 shows Lindsay's nails secondary to chronic renal failure.

Terry's nails are white nail beds to within 1 to 2 mm of the distal border of the nail. These nail findings are most commonly associated with cirrhosis, hypoalbuminemia, chronic congestive heart failure, and adult-onset diabetes mellitus. Figure 8-9 shows classic Terry's nails.

Is koilonychia present? Koilonychia, or ''spoon nail,'' is a dystrophic state in which the nail plate thins and a cuplike depression develops. Spoon nails are most commonly associated with iron-deficiency anemia but may be seen in association with thinning of the nail plate from any cause, including local irritants. Figure 8-11 shows a normal fingernail in comparison with koilonychia secondary to iron-deficiency anemia.

Inspect the Nails for Clubbing

The angle between the normal nail base and finger is about 160°, and the nail bed is firm. The angle is referred to as Lovibond's angle. When clubbing develops, this angle straightens out to greater than 180°, and the nail bed, when palpated, becomes spongy or floating. As clubbing progresses, the base of the nail becomes swollen, and Lovibond's angle greatly exceeds 180°. The nail has a bullous shape with exaggerated longitudinal and horizontal curvatures. A fusiform enlargement of the distal digit may also occur. In Figure 8-12, a normal finger is compared with a finger with nail clubbing.

To examine for clubbing, the patient's finger is placed on the pulp of the examiner's thumbs, and the base of the nail bed is palpated by the examiner's index fingers. Figure 8-13 illustrates the technique for assessing whether early clubbing is present.

Clubbing of the nails is most commonly acquired but may be inherited as an autosomal dominant trait. When acquired, clubbing is associated with congenital cyanotic heart disease, cystic fibrosis, and acquired pulmonary disease. The most common acquired pulmonary cause is bronchogenic carcinoma. In a patient with chronic obstructive pulmonary disease who manifests clubbing, other causes, including bronchiectasis or bronchogenic carcinoma, should be sought. The initial manifestation of clubbing is a softening of the tissue over the proximal nail fold.

Inspect the Nails for Pitting

Pitting of the nails is commonly associated with psoriasis and psoriatic arthropathy. Involvement of the nail bed and nail matrix by psoriasis causes the nail plate to be thickened and pitted. Nail involvement occurs in about 50% of all patients with psoriasis. Multiple pits in the nail are produced by discrete psoriatic foci in the nail matrix. Minor degrees of pitting are also seen in persons with no other skin complaints. Pitting rarely occurs in toenails. Psoriatic nail pitting is shown in Figure 8-14; Figure 8-15 illustrates a cross section of pitting. Figure 8-16A shows psoriatic nail lesions in another patient. Notice the characteristically dystrophic nail changes caused by subungual hyperkeratosis. Figure 8-16B is a close-up of a typical nail with psoriatic changes.

Inspect the Skin of the Face and Neck

Evaluate the eyelids, forehead, ears, nose, and lips carefully. Evaluate the mucous membranes of the mouth and nose for ulceration, bleeding, or telangiectasis. Is the skin at the nasolabial fold and mouth normal?

Inspect the Skin of the Back

Examine the skin of the patient's back. Are any lesions present?

Examination with Patient Lying Down Inspect the Skin of the Chest, Abdomen, and Lower Extremities

Ask the patient to lie down so that you can complete the examination of the skin. Inspect the skin of the chest and abdomen. Pay particular attention to the skin of the inguinal and

Figure 8-13 Technique for assessing whether clubbing is present.

Figure 8-16 A and B, Psoriatic nail lesions.

genital area. Inspect the pubic hair. Elevate the scrotum. Inspect the perineal area. Evaluate the pretibial areas for the presence of ulcerations or waxy deposits.

Examine the feet and soles carefully for any skin changes. Spread the toes in order to evaluate the webs between them thoroughly.

Ask the patient to roll onto the left side so that you may examine the skin on the back, gluteal, and perianal areas.